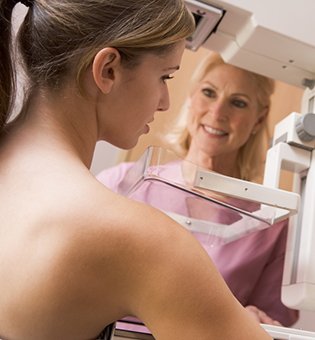 The sentinel node procedure is a technique used by breast surgical specialists to find out whether there are breast cancer cells in the lymph nodes in your axilla.

Traditionally, when a woman had a mastectomy all, or almost all, of the tissue was removed along with the breast. This tissue consists of fat, lymph nodes, lymph and blood vessels, and some nerves. Removal of this tissue either as part of a mastectomy or through a separate incision in the axilla is called an axillary dissection. Surgeons used to think that the best way to treat breast cancer was to remove the entire breast and any cancer cells that might be in the axillary tissue. During the last 20 years, we now understand that removing the axilla does not prevent the spread of breast cancer. At about this same time, we learned that we can treat breast cancer with breast conservation (removing only the cancer from the breast, followed by radiation to the remaining breast tissue). And we found that we could make a separate incision in the axilla and remove some, but not all, of the tissue there. We also learned that those women who do have cancer cells in their axilla benefit from additional treatment with chemotherapy or hormone therapy. Also, in those women who have some cancer cells in their nodes, it sometimes helps us to know how many nodes have these cells so that we can plan additional treatment.